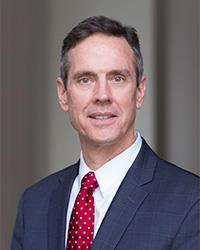 What is your relationship with failure? Sean Callahan, CEO of Catholic Relief Services (CRS), shares a refreshing, real and deeply authentic take on failure, and highlights the importance and need for trust in the development sector. Join Lynne Gilliland in this new episode of the Lessons from Leaders series.

Lynne: Good afternoon, I’m here with Sean Callahan, who is the CEO of CRS. Unlike some of my guests, I know some of Sean – his history – because Sean and I started more or less at the same time at Catholic Relief Services back in the late 80s.

I happened to be finishing up at the Fletcher School and someone came from CRS for the internship. They said, How about giving something back? I responded with, Yeah, I should give back a year. And then soon the single year turned into 30.

What do you think kept you staying?

I think probably the most important thing is [that] the values and the mission of what we do is trying to be a support to local people and assist them. Many of us have been blessed with either resources or history, and I think trying to share some of those blessings with others would be probably number one on the mission. I’d say number two would be fantastic colleagues that I’ve had throughout the history here at CRS. Working together with great people and doing this type of great work, and frankly, seeing the substantial change that we’ve been able to be a part of has been exciting…

I have a colleague who was working in South Sudan. Two people came on a flight and they ended up getting off at the wrong airport. Where they landed, they were in the minority, and some of the local people rounded them up and were going to kill them. My colleague, stepped in and said, This doesn’t make sense, you shouldn’t do this, and pleaded with the Colonel at the time. And he said, Well, I have to bring them to the general. She walked in the bush for two days with the Colonel and these two gentlemen and made her case to the general, who then spared their lives. She stayed there and made sure that they got to another area of the country where they would be safe. Here is someone who probably violated most of our security practices but did it to save the life of two other colleagues that were working in this type of area. Seeing that type of commitment and dedication from people in South Sudan, in Central America, in Asia, is just something that I think continually impresses me and inspires me to continue in this work.

Sean, what are the things that you find draining in your job?

I can imagine that that weighs on you, that’s always with you.

We need to make sure that if we put people in areas where they could be in harm’s way, that we’re making sure that we’re doing things right and we’re maximizing the time and investment of these people that are in those areas. I just came back from Nigeria, and we have a bunch of colleagues up in the North East, where it’s a Boko Haram area and very difficult, and met with the US government and the Nigerian government, they’re talking about some of the challenges they have up in those areas. I was asking them about security. I met with some of our team that is working up in those areas, and I think they feel very comfortable with the way things are, but it is something that day in and day out, it’s always in the back of your mind in these positions. Are we taking good enough care and protecting our staff enough?

What advice would you give your younger self?

The first thing would be to not be afraid to follow your values and to stick with your values. I think when we compromise our values, we have regrets. When we don’t compromise our values, no matter what happens, at least we feel like we stood for something, and I think other people see that, feel that, and know that. I think that’s crucial. The second thing I would say is to be patient. I think I was in maybe too much of a hurry. It’s not just getting to the top of the mountain, it’s enjoying the climb.

How do you inculcate, you Sean, CRS with that understanding or that culture?

The first thing I do in the morning is I look to see whose birthday it is today around the world, and I send them a little note to say, Happy Birthday. Hope you do something special. And I think people just feel like, Wow, somebody’s taking some time to recognize me. And that’s important and of value. It is developing those relationships with people. And I think we as leaders need to model that, because people are always watching and they will understand what we do more than what we say, and so I think we have to demonstrate it.

If I remember correctly, one of the values for Catholic Relief Services is be humble, be bold. It’s my favorite way of saying it.

I had the opportunity of working with Mother Teresa in Calcutta, and she was certainly very bold, but also very humble. I remember the first time that I met her, we had a little private meeting, and I was sitting next to her, and she was saying, Oh, thank you. CRS was one of the first organizations that assisted us. And I said No, no, no, Mother. It’s us who should be thankful to just be associated with the work you do on behalf of the poor. And she said, Shhh, don’t spoil it. And I thought it was rather interesting. She did not want to have the recognition or credit. She was doing it for the people and not for the recognition.

I wanted to also ask you about failure. What is your relationship with failure?

To me, that is a real tough one. I must say, in my upbringing, we were supposed to succeed, and we’re supposed to be top in our class, and we’re supposed to do those things. So, I must say, failure is always a challenge. But I think there are two things that I would say related to the failure. I think the first one is, and it goes back to my original comments of some of the important things, I think that if we’re true to our values and we do things, then failure is often a more minor issue than if we abrogated our values in a certain way. And so, I think to see the values and what we need to do and the demands that we have – we must take risks. And frankly, in being in the C-Suite, there’s a lot more risk than I realized, and I think you can be subjected to failure in so many different ways. It is being true to yourself and your values so that you can do that.

I think on an agency front, I see it a little differently, and I see the most difficulty we have is failing fast. And when I say failing fast, it is that we recognize that pushing the stone up the hill isn’t going to get us to where we want to go, and it’s very difficult for an agency like ours, because we do things, and our people are out there to make something happen, no matter what. And so, it doesn’t matter how difficult, it doesn’t matter how dangerous, we’re going to do this. And if we thought of a certain methodology and it doesn’t work, they’ll use some other methodology.

I would just say that the most important thing in development is trust. And that is that local communities trust us, our staff and colleagues trust us, and that we’re, as I mentioned, true to our values, which assists us in that trust mechanism.